How to Cut Cheese the Right Way (ART)

Do not cut all cheeses the same way. Aesthetic reasons apart, cutting can affect flavor!

Every cheese has its knife!

To keep things simple and limit cutlery, a cheese knife with an open-surface blade and fork-tip is essential! 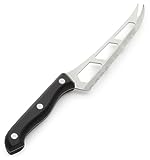 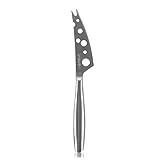 These knifes can cut most cheeses to varying widths and the slices can then be pronged for easy service.

A Tip:
If you have more than one cheeses to cut, use multiple knives so you can keep the sometimes overwhelming powerful flavors apart.

Also read: Can I Eat the Rind on Cheese?

How to Cut Different Types of Cheese

Small round cheeses such as Camembert should be sliced as you would a cake, in equal parts, starting from the center and moving out to the edge.

Square cheeses such as Maroilles are to be sliced into wedges like round cheeses.

However, you start by cutting across the diagonals first to create four triangles; then cut each quarter in half.

Pyramid-shaped cheeses such as Valençay should be cut like round cheeses or cake.

Start cutting from the center and move on to the edge. Then cut into wedges.

You should cut wedges such as Comté starting from the narrow point and make three or four parallel cuts.

Then divide the heel into pieces, making cuts perpendicular to the previous ones.

Blue wedges such as Roquefort should be cut from the narrow part of the center point.

Cut diagonally into 6-9 slices depending on the size.

Log-shaped cheeses like Charolais and Sainte Maure de Touraine should be cut into small logs by standing them on end and slicing them into thinner portions.

Reminder:
Be reminded to remove the straw when slicing Sainte-Maure de Touraine to avoid breaking up the cheese.

You should make a hole through the rind of runny cheeses such as Mont d’Or.

DO NOT remove the rind; it should be eaten!

Recommended tool: A small spoon placed in the center

How to ‘Taste’ Cheese Through the Nose

What Knives and Tools to Use When Serving...

The Importance of ‘Relaxing’ Your Cheese Before Serving

How to ‘Taste’ Cheese Through the Nose

Can I Eat the Rind on Cheese?